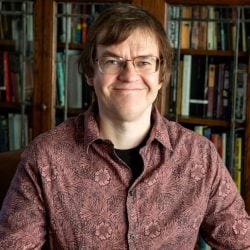 Michael W. Clune is a writer and scholar of literature. He is Samuel B. and Virginia C. Knight Professor of Humanities at Case Western Reserve University.

Clune believes literary style isn’t decoration, but a form of knowledge. He uses creative writing to open new perspectives on problems, then employs academic methods to work out the implications. His first creative book, White Out, which was named a “Best Book of the Year” by The New Yorker, NPR, and other venues, approaches his experience of addiction as the problem of an object that never gets old. His critical book Writing Against Time develops this insight into a theory of literature’s effort to create an object endowed with what Proust called “permanent novelty.”

Clune’s current work focuses on the nature of aesthetic judgment. His memoir Gamelife, which appeared in 2015 from Farrar, Straus and Giroux, provides a miniature model of an aesthetic education through the story of seven computer games. The critical work he will complete during his Guggenheim fellowship, A Defense of Judgment, argues that in order to realize the potential of education in the arts, we require a new theory of judgment. A political environment of regressive populism, and the post-recession scrutiny of the role and viability of the study of the arts, lends urgency to this topic. Is the abdication of judgment on the part of professors and critics a progressive, egalitarian commitment? Or does it simply throw all decisions about value into the ever-expanding marketplace? What should aesthetic judgment look like as a professional, academic practice? Does aesthetic judgment concern form only, or is there a place for ideas?

Clune’s creative and critical writing has appeared in The Atlantic, Behavioral and Brain Sciences, Representations, Harper’s, and elsewhere. He has been interviewed about his work for venues ranging from NPR’s “All Things Considered,” to CSPAN’s “Book TV,” to “The Sean Hannity Show.” His writing has been translated into Japanese, Dutch, German, Spanish, and other languages.