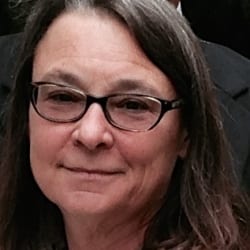 Michelle Boisseau is a widely published poet with roots in the Midwest but whose poems reach across cultures, time and space. She was born in Cincinnati, educated at Ohio University (BA 1977, MA 1980) and the University of Houston (PhD 1985). Currently she is Professor of English at the University of Missouri-Kansas City where she teaches in the MFA program and is Senior Editor of BkMk Press and Contributing Editor of New Letters.

About her work Boisseau says, “Over my writing life, I have worked to explore and refine the resources of metaphor, rhythm, and form to open ways into how we experience time, personally in its fleetingness, and also publicly, in how we live simultaneously with others and with the traces of those who came before us. And some of those others are not human (the sequoia, the mayfly, the besieged whale), and so we are just as alive, perplexed, and self-obsessed as were the generations before us. Within its intense small spaces, poems can create moments in which the reader/listener can feel bodily the reality of what is here now—and what was once here, just as vividly as we are at this moment. Poetry has a sacred duty to connect things that don’t seem connected, to dig down and chart the subterranean rivers. It is a way of knowing, or trying to know. ‘The poet comes to words,’ says Wallace Stevens, ‘as nature comes to dry sticks.’ In the work of the poem, we open the buds, we start the fires. Especially inside ourselves.”

Boisseau is the recipient of two NEA fellowships in poetry and has published five books of poetry. Among the Gorgons (the University of Tampa Press, 2016) wields the wit and relentlessness of the baroque and the grotesque to explore aging, disease, death, grief, but also squirming, urgent life. Her A Sunday in God-Years (University of Arkansas Press, 2009) in part examines her paternal ancestors’s slave-holding in Virginia, into the 17th century. Trembling Air was a PEN USA finalist (also Arkansas, 2003); she has also published Understory, the Morse Prize, Northeastern University Press, 1996; and No Private Life, Vanderbilt, 1990.

The Mountains and the Swamp: An Interview with Poet Michelle Boisseau