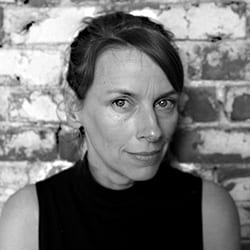 Michelle Ellsworth uses her expansive definition of dance as well as video, text, performance sculptures, and the World Wide Web to explore topics ranging from pharmaceutical art to experimental surveillance. Consistently commingling with technology and objects, her recent works were highlighted in the New York Times’ article Best of Dance 2015 under the heading “Dances With Gadgets.”

Currently Ellsworth is developing The Rehearsal Artist (part performance and part social science experiment) to observe how a body’s meaning and function shift as it collides with other bodies in the context of a reoccurring rehearsal/experiment. Next up is the Post-Verbal Social Network, which employs pre-industrial technology to augment the physical labor of choreography and community. For both of these projects, Ellsworth will collaborate with video and sound artist Max Bernstein, lighting designer and reactive artist Ryan Seelig, web programmer and designer Satchel Spencer, and alpinist and carpenter Bruce Miller.

Currently, Ellsworth is an Associate Professor of Dance at the University of Colorado Boulder.

Other links:
Choreography Generator
Clytigation: State of Exception, at the Chocolate Factory, November 2015
Preparation for the Obsolescence of the Y Chromosome, at the American Realness Festival, January 2015
Photograph credit: Satchel Spencer