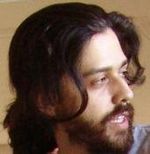 Independent filmmaker Miguel Coyula Aquino was born March 31, 1977, in Havana, Cuba. At age 17, he made his first short with a VHS camcorder, which led to his admittance to the International Film School of San Antonio de los Baños, Cuba (EICTV). Since then he has won awards in his country with his experimental short films Bailar Sobre Agujas (1999), Buena Onda, (1999), and Clase Z Tropical (2000), among others.

In 2000, he was offered a scholarship to the Lee Strasberg Theater Institute in New York, where Mr. Coyula made his first feature, Red Cockroaches (2003), for less than $2,000 over a two-year period. The film was described by Variety as "a triumph of technology in the hands of a visionary with know-how…" and went on to gather several awards in the international film festival circuit. His next project is Memorias del Desarrollo, a follow-up to the Cuban classic Memorias del Subdesarrollo (1968), based on the novel by Cuban writer Edmundo Desnoes.

The stories, characters, and narrative devices that interest me generally depart greatly from the mainstream, so it was very clear to me from early on that I had to work as an independent filmmaker if I wanted to get anything done. This has gone to the extreme, though.

My goal is to create films with complete artistic freedom of experimenting with language, without the structure interference of an industry or even a full film crew, and while keeping high production values at a very low cost. Thanks to digital technology the camera becomes an extension of your arm, and postproduction allows you to create anything you sometimes don’t have the means to create on location. As a result I simultaneously work on preproduction, production, and postproduction of my films, because each stage influences all the others; for example, while I’m editing I can get an idea for a new scene and go out and do it. It’s a way of working that eliminates many of the traditional obstacles that exist when translating your thoughts into moving images.

Follow these links to view the trailers for Miguel Coyula’s films:

Follow these links to read a review of Miguel Coyula’s films: