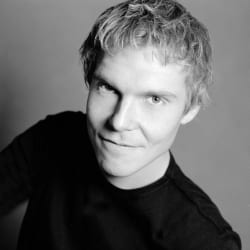 Swedish composer Mika Pelo is currently Associate Professor of Composition at University of California, Davis, and his music is published by Edition Peters, Germany. Mika writes music for soloists, chamber ensembles, and orchestras, with or without electronics. He holds a doctorate in composition from Columbia, and his principal composition teachers include Tristan Murail and Bent Sørensen.

Early successes include a nomination for the Gaudamus Prize in Amsterdam, Holland for his string orchestra piece Apparition, which was performed twice at the festival by the Dutch Radio Chamber Orchestra under the supervision of conductor and composer Peter Eötvös, and his exam piece from the conservatory, a Violin Concerto, performed by the Swedish Radio Symphony Orchestra.

Pelo is inspired by the French so-called spectral composers and Scandinavian lyricism and describes his method of composition as “controlled dreaming.” The Strad magazine thinks that Pelo’s music “fashions a fascinating mosaic of sonorities,” and the Irish Times writes that Pelo’s music is built by “gestures that were once the province of the avant-garde … here pliably exploited by a sensibility that sounded decidedly romantic.”