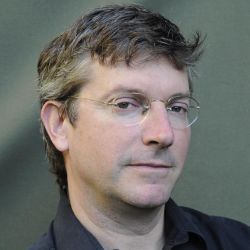 The photographic artwork of Miles Coolidge (b. 1963, Montreal, Canada) gained international visibility in the mid-1990’s, standing out as a synthesis of his exposure to the post-studio ethos of his California Institute of the Arts experience as an MFA student, and his year of DAAD-supported post-graduate study in the class of Bernd Becher at the Kunstakademie Düsseldorf.

His artwork is often concerned with subject matter at the intersection of landscape and architecture. Projects frequently take forms suggested by these subjects; Garage Pictures (1992), Elevator Pictures (1994) and Street Furniture (2007) follow the serial typological format identified with Bernd and Hilla Becher because they are most readily understood as instances within a category. Safetyville (1994-6) and Observatory Circle (2001) and Instead of a Bridge (2002), on the other hand, are studies of place and are shaped by the character of these locations. Other projects- Accident Investigation Site (2005), Francis Gate (2010-13) and Crackberry (2005) are more singular, distilling an idea into a lone rectangular image. Coolidge’s work presumes that ideas are already out there in the world around us- the camera is thus both a conceptual and a technological device for bringing these to our attention.

While photography is most often the medium best suited for the realization of his work, he has used other forms when more appropriate. Posters (Mound Postcard Posters, 1998-2000), billboards (Serpent Mound, Adams County, Ohio, 2003) and newspapers (Hauptplatz Graz, 2003), have all served as vehicles for his work at one time or another. Current work under development with assistance from the Guggenheim Foundation Fellowship includes Chemical Pictures, a series of artworks using paper as a staging ground for reactions between chemicals in solution, realized in tribute to the foundational research into the production of artificial color by the 19th century German natural philosopher F.F. Runge.