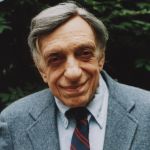 Mr. Gordon is the author of four books: Social Class in American Sociology (Duke UP, 1958); Assimilation in American Life (Oxford UP, 1964); Human Nature, Class, and Ethnicity (Oxford UP, 1978); and The Scope of Sociology (Oxford UP, 1988). He is the Special Editor of the volume America as a Multicultural Society (an issue of the Annals of the American Academy of Political and Social Science, 1981). He was also the founding General Editor of Prentice-Hall’s “Ethnic Groups in American Life,” a series of eleven books published between 1965 and 1986, several in multiple editions.

His second book, Assimilation in American Life, was awarded two national prizes: the Anisfield Wolf Award in Race Relations and the Brotherhood Award of the National Conference of Christians and Jews. It has sold well over 100,000 copies and is still in print. It is one of the most widely cited books in the field of racial and ethnic group relations and is considered the standard work on the assimilation process. It has been frequently referred to in recent years as a “classic.”

Mr. Gordon’s articles have appeared in American Sociological Review, American Journal of Sociology, Social Forces, Social Problems, Annals of the American Academy of Political and Social Science, and the New York Times Magazine, among other periodicals.

Mr. Gordon has been a consultant on race relations and ethnicity to the city of Philadelphia and Brandeis University, and received research aid from the Russell Sage Foundation and the Social Science Research Council. He was elected President of the Eastern Sociological Society for 1978-79. At UMass, Mr. Gordon taught graduate and undergraduate courses in race and ethnicity, social stratification, and sociological theory. His work in race and ethnicity and social stratification has been broadened in recent years by his concern with creating stronger links between sociology and psychology and by attention to the human nature issue.

Milton Gordon was given the Distinguished Bowdoin Educator Award by his alma mater in 1992. In 2002, he received the Distinguished Career Award from the International Migration Section of the American Sociological Association, one of the profession’s highest honors, at the annual meeting of the Association in Chicago.