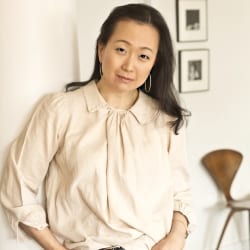 Min Jin Lee was born in Seoul, South Korea and immigrated to the United States when she was seven years old. She grew up in Queens, New York. A graduate of the Bronx High School of Science, she studied history at Yale College, then received a J.D. from Georgetown University Law Center. After practicing for several years, she began writing full time. She lived in New York with her husband and son until 2007 then spent several years in Japan, researching and writing her second novel Pachinko. She lives in New York with her family.

Lee is a novelist, essayist, and critic. Pachinko was a finalist for the National Book Award and on numerous “Top 10 Books of the Year” lists, including The New York Times, USA Today, BBC, and the New York Public Library. A New York Times bestseller, Pachinko was on over 75 “Best Books of the Year” lists globally, including NPR, PBS, CNN, Financial Times, New Statesman, and The Irish Times. Lee’s debut novel Free Food for Millionaires was a “Top 10 Books of the Year” for The Times, NPR’s Fresh Air and USA Today.  Her short fiction has been featured on NPR’s Selected Shorts and One Story. Her writings about global affairs, books, travel, and food have appeared in The New Yorker, The Guardian, The New York Times Magazine, The New York Times Book Review, The Times Literary Supplement, Conde Nast Traveler, The Times of London, Vogue, Travel + Leisure, Wall Street Journal, and Food & Wine.  She served as a columnist for The Chosun Ilbo, South Korea’s leading newspaper for three seasons. She received the NYFA Fellowship for Fiction, the Peden Prize from The Missouri Review for Best Story, and the Narrative Prize for New and Emerging Writer. Lee is currently researching and writing her third novel, American Hagwon, which explores the role of education for Koreans around the world for her diaspora trilogy “The Koreans,” which includes, Free Food for Millionaires (2007) and Pachinko (2017).