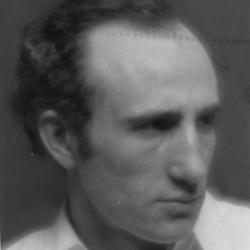 Mitchell Fields, né Mendel Feldman (September 28, 1901-October 6, 1966), was a Romanian-born Jewish-American sculptor. He is known for his life-size statues, as well as for his portrait busts. Fields’s works belong to the schools of Realism and Social Realism.

Career in the USA

On completing his studies at the National Academy of Design School of Fine Arts and the Beaux-Arts Institute of Design, both in New York, in 1927 Fields began to work as a sculptor; he created in clay and plaster, in marble, and when commissioned to do so, cast his works in bronze. Fields continued living in New York City, where he belonged to an informal circle of predominantly Jewish artists whose work was for the most part representational: Moses Soyer, Raphael Soyer, Ben Shahn, De Hirsch Margulies, James Lechay, Myron Lechay, Joseph Cantor, Saul Berman were among the painters; while after World War II his “circle” included the sculptors Clara Bratt, Chaim Gross and Jacques Lifschitz. There were not many commissions to be had during the Great Depression. As did many artists at the time, Fields worked for the Federal Arts Project of the Work Projects Administration.

During the mid-1930s Fields divided his time between New York and Europe. The Guggenheim Foundation awarded him a fellowship in 1932 which enabled him to live and work in Paris; subsequently, in 1935 a second Guggenheim Fellowship enabled him to reside and work in Moscow. During this period statues of his were placed in the Park of Culture and Rest, the Museum of Modern Western Art, and in the Gorki Literary Museum, all in Moscow, as well as in the Birobidjan Museum. In 1938 Fields, his wife Beatrice (nee Meyers) and their infant son Michael David returned to New York City. Fields continued creating sculpture until the entrance of the United States to World War II. Too old to be drafted into the army, he decided to “do his bit” for the war effort by working in a factory which engaged in war production; he operated a lathe on the production line until after the final Allied victory.

In the late 1940s, 1950s and 1960s Fields lived in New York. Among other works, he created a larger-than-life-size portrait bust of Albert Einstein which was placed in the Museum of Immigration on Ellis Island.

From the late 1950s until his death in 1966 Fields spent periods of time working in Israel, where he created portraits of personages for public spaces. These personages included Yehiel De Nur (Ka-tzetnik), author; Yosef Sprinzak, first Speaker of the Knesset; Chaim Sheba, Chief Medical Officer of the Israel Defense Forces and head of the Tel Hashomer Hospital, which now bears his name; Member of Knesset Avraham Hertzfeld, as well as works now in private collections.

Having sculpted portrait busts of writers Romain Roland and Theodore Dreiser, during this period he created a portrait bust of the great Yiddish author Shalom Aleichem; he also attempted a portrait bust of Anne Frank as she might have looked during the last months of her life in hiding with her family in the “Secret Annex,” based upon available photographs from when she was younger. Fields sent photographs of the bust to Frank’s father, Otto, who felt that the portrait did not represent his daughter as he remembered her during their last months together. His statue Young Woman Holding a Bird is in the School of Nursing of the Sheba Hospital at Tel Hashomer.

Mitchell Fields passed away after a short illness on October 6, 1966. He is buried in Kibbutz Hazorea, Israel; his statue Naomi, which twice enabled him to receive a Guggenheim Fellowship, is exhibited at the entrance to the kibbutz’s Wilfred Israel Museum.

Fields’s sculptural language was representational. Having been educated in the tradition of Realism, which ascribed to an ideology of objective reality and rejected what its practitioners saw as the exaggerated emotionalism of nineteenth-century Romanticism, he created life-size (and on occasion over-life-size) statues of the human body, both female and male. Fields depicted women as strong, capable figures, who were simultaneously feminine in a traditional sense.

His portrait busts and bas reliefs were articulated in a non-abstract idiom. As was the case with many American artists from immigrant families who came of age during the Great Depression, some of his works may be seen as part of the Social Realist movement, one of whose aims was to depict the working class as heroic. Yet despite his left-wing political views, the large majority of his works did not bear a political message.

Even after World War II, when many American artists moved in the direction of Abstract Expressionism, Fields continued to create within the realist canon. During the early 1950s he began to work in ceramics, producing small tables and household items such as cups and vases. A short-lived attempt to sell the latter via a small business did not succeed commercially. His ceramic art work, with its richly-toned glazes and whimsical shapes, was his only attempt at adopting a semi-abstract idiom.