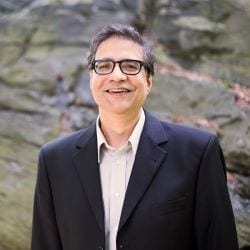 Mukul Sharma is a professor of Earth Sciences at Dartmouth College. He was born in Delhi and did his early studies in India. He received his B.Sc. from the University of Delhi and M.Sc. from the Indian Institute of Technology, Bombay. He earned another master's and his doctorate from the University of Rochester. He was a post-doctoral fellow at the California Institute of Technology and at the Max-Planck-Institut für Chemie, Mainz. His research focus is very broad and over the years he has examined diverse problems such as the evolution of early Earth, mixing and homogenization of Solar Nebula, origin of mantle heterogeneities, the relationship between solar magnetic activity and terrestrial climate, osmium budget of the ocean, methane production on Mars, and water-rock interaction during hydraulic fracturing. Recently, he has been working on to measure the osmium and iron isotope composition of solar photosphere, and to investigate a) the behavior of platinum metals in the ocean, b) the cause(s) of Younger Dryas abrupt climate change, and c) the role of clay minerals in preserving carbonaceous material in black shale. For the Guggenheim, he will explore a novel approach to utilize clay minerals to sequester atmospheric carbon dioxide in the ocean. Photo Credit: Rob Strong/Dartmouth