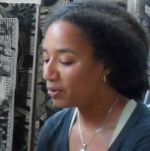 Myriam J. A. Chancy, Ph. D., is a Haitian-Canadian/American, writer/scholar and photographer; she obtained her Ph.D. at the University of Iowa at the age of twenty-four as a Social Sciences and Humanities Research Council of Canada (SSHRCC) Fellow, awarded to her at the age of twenty while completing her M.A. in African American Literature at Dalhousie University in Halifax, Nova Scotia. She is the author Searching for Safe Spaces: Afro-Caribbean Women Writers in Exile (Temple 1997; Choice OAB Award, 1998), the groundbreaking Framing Silence: Revolutionary Novels by Haitian Women (Rutgers 1997), the first book to argue for a coherent tradition of Haitian women’s literature; and From Sugar to Revolution: Women’s Visions of Haiti, the Dominican Republic, and Cuba (WLUP 2012/13). On the strength of her first two books in the field of Caribbean Studies, she received early tenure at the age of twenty-seven. Subsequently, her first novel, Spirit of Haiti (Mango 2003), was a finalist in the Best First Book Category, Canada/Caribbean region, of the Commonwealth Prize 2004.  She also authored The Scorpion’s Claw (Peepal Tree Press 2005), and her third novel, The Loneliness of Angels (Peepal Tree Press 2010), was awarded the 2011 Guyana Prize in Literature Caribbean Award, Best Fiction 2010, and shortlisted in the fiction category of the Bocas Prize 2010. Her work as editor of Meridians (2002–2004) garnered the CELJ Phoenix Award for Editorial Achievement in 2004.

A frequent invited guest and keynote speaker, she is a recent editorial advisory board member of PMLA and has served as an NEH and Prince Claus Fund expert reviewer as well as humanities advisor for the Fetzer Institute. Her photography has been exhibited in California, Massachusetts, Vermont, and Ohio, sold to private collectors, and graces the covers of three of her books.

During her Guggenheim Fellowship term, Myriam Chancy will be completing a monograph informed by travels, through the Caribbean, North America, Southern Europe, and Northern Africa since the early 2000s, which have influenced her to rethink race in complex ways. Autochthonomies is a book of textual and cultural studies focusing on the tropes of transnationalism, testimony, and transmission within and between African diasporic texts. The word autochthonomies is her neologism to describe a practice of subjectivity and agency employed by African diasporic artists through literary and visual texts. She argues that these artists assert a practice of anchoring their works in mobile, indigenous African cultures and those of their diasporas, while also assuming the universal practice of seeking freedom in the constitution of personhood.  Not a work simply concerned with “racial rehabilitation” or the equally suspect notion of “inclusion” within the dominant discourses of North America and Western Europe, Autochthonomies intends to serve as an intervention in race, Caribbean, African diasporic, and cultural studies by providing a radically new model for a culturally imbedded reading practice of contemporary works by African and African diasporic artists.

Follow this link to an interview conducted by the University of Oregon.

Follow this link to view a video of Myriam Chancy’s work with the Fetzer Institute, Love and Forgiveness in Collectivity.