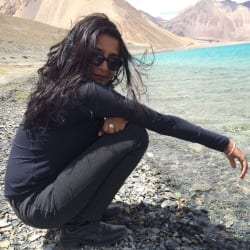 Born and raised in New Delhi, Nandini Sikand is a filmmaker, dancer-choreographer, author and cultural anthropologist. Her interdisciplinary work is informed by the fluidity of working between and within the fields of film and media, and dance and performance, in both India and the United States. She has published articles on cinema, performance, , a book on Odissi dance as an embodied form and global commodity, and made films on subjects such as immigration, nationalism, sex work, breast cancer, and counter-culture music. She has created performance pieces about the prison system, gender, and the politics of gestural language.

Sikand’s films have screened and won awards at over one 100 domestic and international film festivals, and aired on PBS. Her work has been recognized by The Jerome Foundation, New York State Council on the Arts and the Center for Asian American Media. She is the co-founder and co-director of Sakshi Productions, a neo-classical and contemporary dance company. She is the Associate Director/Choreographer for Harmattan Theater, a performance group committed to an environmentally and socially-engaged theater. She has served on the board of directors of Women Make Movies, a non-profit feminist media distribution organization from 1997-2006.

As a practitioner and scholar who straddles theory and praxis, Sikand is increasingly interested in the somewhat arbitrary divisions between the two. In other words, how do we practice theory, and conversely how does the processual affect our theoretical engagement with the world? Sikand explores in her work what bell hooks has called “theory as liberatory practice;” hooks has argued, “theory is not inherently healing, liberatory or revolutionary, it fulfills this function only when we ask that it do so and direct our theorizing towards this end” (hooks, 1991). To that end, theory, when put into practice has the potential to transform a collective struggle.

Sikand is an Associate Professor at an interdisciplinary film and media studies program at Lafayette College, PA and is currently working on Inside/Outside, a feature-length documentary on women and mass incarceration in Pennsylvania.