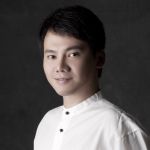 Prangcharoen received his D.M.A. from the University of Missouri, Kansas City, where he studied with his primary teacher Chen Yi. In addition to working as a freelance composer, he is currently teaching at the Community Music and Dance Academy of the Conservatory of Music, University of Missouri, Kansas City. Prangcharoen is the founder of the Thailand International Composition Festival in Thailand.

Follow the links below to listen to examples of Narong’s work:

The Dawn of Darkness for Tenor Saxophone and Orchestra