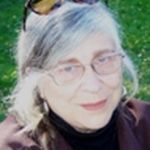 Natalie Charkow Hollander lives and works in Woodbridge, Connecticut, and is married to poet John Hollander.  She was born and raised in Philadelphia and attended Tyler School of Art.  Following graduation she taught at the Philadelphia College of Art (now University of the Arts) and founded its sculpture department. Subsequently, she has taught in M.F.A. programs at the Yale School of Art, Boston University, Queens College-CUNY, the University of Pennsylvania, Indiana University, and the New York Studio School.

She continues to lecture on her work and give critiques at art schools and university art programs throughout the U.S., and to work on commissions as well; these have included pieces for William Louis Dreyfuss, the City of Philadelphia, Theodore Danforth, New York City, Queens College, and RCA.