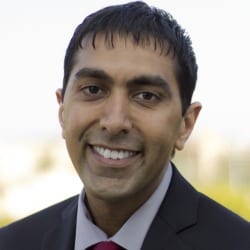 Neil Garg is a Professor in the Department of Chemistry and Biochemistry at UCLA. Prior to joining the faculty at UCLA, Neil received his B.S. in Chemistry from New York University, followed by his PhD from the California Institute of Technology where he studied under the direction of Professor Brian Stoltz as an NDSEG Fellow. He subsequently spent two years as an NIH Pathway to Independence Fellow with Professor Larry Overman at UC Irvine before beginning his independent career at UCLA in 2007. In 2012, he was promoted to Associate Professor and began serving as Vice Chair for the Department of Chemistry and Biochemistry. In 2013, he was promoted to Full Professor.

Neil maintains a world-renowned organic chemistry research laboratory at UCLA. The research efforts of his team span the discovery of new chemical reactions, the understanding of how organic molecules react, and the chemical synthesis of biologically important molecules that may ultimately benefit human health. His laboratory has developed new reactions catalyzed by non-precious metals and has also been a leader in the field of aryne chemistry. His team has synthesized many compounds of importance, such as medicines and natural products that possess intricate chemical structures.

Neil also relishes the opportunity to teach students at the graduate and undergraduate levels. He serves as Faculty-in-Residence and lives with his family amongst the UCLA student body. He is also a popular teacher of undergraduate-level organic chemistry and challenges his students to overcome their pre-fabricated perceptions of organic chemistry, as he discussed at TEDxUCLA. Neil engages students by showing them the relevance of organic chemistry in every day life using online tutorials and giving them the opportunity to create organic chemistry music videos, all while teaching them to solve extraordinarily difficult problems. His class has been referred to as one of UCLA’s ‘most beloved’ classes and was featured in the magazine LA Weekly as being one of the best classes in the city of Los Angeles.

Neil has co-authored more than 80 publications and patents and has given more than 170 presentations nationally and internationally. In addition to the Guggenheim fellowship, Neil has received several awards, such as the NSF CAREER Award, the Camille Dreyfus Teacher-Scholar Award, the UCLA Distinguished Teaching Award & Eby Award for the Art of Teaching, the ACS Arthur C. Cope Scholar Award, the UCLA Gold Shield Faculty Prize, the Tetrahedron Young Investigator Award, the Thieme-Iupac Prize, and the US Professor of the Year Award for the state of California.