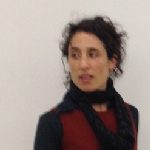 Netta Yerushalmy has been creating dances since 1995. Known for its unique and fierce physicality, her work distills the awkward as an aesthetic quality, juxtuposing a sense of discomfort with beauty and power, in both movement and composition. She has been lucky to create her project-based pieces with a diverse group of extraordinary performers in New York City and in Tel Aviv.

Ms. Yerushalmy received a 2010 Fellowship in Choreography from the New York Foundation of the Arts, and a 2010–2012 Six Points Fellowship. She has been an Artist-in-Residence at the Tribeca Performing Arts Center since 2010 and was a 2011 LMCC Swing Space resident.

She is currently working on a new project that will premier at LaMama Etc., December 13th–16th, 2012. Recently, she was commissioned to create new works for the Zenon Dance Company (Minneapolis), the Ensemble at University of the Arts (Philadelphia), and the Philadelphia International Festival of the Arts (PIFA).

Ms. Yerushalmy trained in Israel at Misgav Dance Workshop, Kibbutz Dance Company, and Bat-Dor studios (Tel-Aviv). In 1996 she relocated to New York City to earn a B.F.A. in Dance at NYU’s Tisch School of the Arts.

She has presented work in the International Solo-Dance-Theater Festival in Stuttgart, Germany and has been commissioned in the USA by Danspace Project, Harkness Dance Festival, Dance New Amsterdam, The Yard , and others. In Israel she has been commissioned by Curtain-Up and Intimadance festivals. Her work has been presented in the United States as part of group shows at venues such as The Kitchen, LaMama Etc., Jacob’s Pillow Dance Festival, Movement Research @ Judson Church, and others. In Israel her work has also been presented as part of International-Exposure and Different Dance festivals at Suzanne Dellal.

Ms. Yerushalmy was invited to create works for the Harkness Repertory Ensemble (New York City), Of MovingColors (Baton Rouge, Louisiana), and the Misgav Dance Workshop (Galilee, Israel). She has taught modern technique at the Yasmeen Godder Studio (Jaffa, Israel), Bikurey Haitim Center (Tel-Aviv, Israel), among many others. As part of her work with Doug Varone, she has taught around the U.S., Russia, and the Dominican Republic and has staged Varone’s work at the University of Michigan and at Point Park College. Netta Yerushalmy was a member of Doug Varone and Dancers 2007–2012, and currently works with choreographer Joanna Kotze. She has also worked and toured with Nancy Bannon, Karinne Keithley, Mark Jarecki Dance, Joanna Kotze, Noemie LaFrance, Ronit Ziv, and the Metropolitan Opera Ballet.