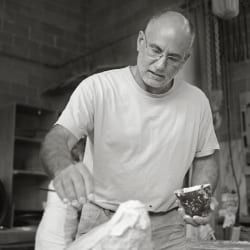 I was born June 12, 1960, in Rockville Centre, Long Island. The energy to create has always been there. I attended church every Sunday, played sports in school, listened to music, liked to draw, paint, do calligraphy, and weave rugs.

I went to Gettysburg College to major in law and play football. Soon after, I began to attend drawing, painting, and art history courses with Professor Ingolf Qually. Later, wood carver Alan Paulson introduced me to sculpture. The transition from the physicality of sport was a natural one. I also assisted Martin Puryear with the creation of a rubble-stone piece on the campus, one of his first public works. A half year spent studying sculpture in Florence, Italy, was especially important, as well as summer work back home carving granite funerary monuments.

In 1983 I began to exhibit regularly. I moved to New York in 1987 and established the studio in Long Island City. I worked as a conservator of historic stone and sculpture around the northeast and as a carving assistant to Louise Bourgeois in Brooklyn too.

In 2001 I moved to the countryside just near Zürich, Switzerland, where I mostly live and work today.

Early works reveal an interest in the modern masters Rodin, Brancusi, Giacometti, and Noguchi. The academic statues in the city that I was restoring daily, made me aware of another rich and lost world of sculpture underfoot. I became aware of curious parallels between late nineteenth- and twentieth-century sculpture: mainly how major modes of expressive order can suddenly break down. I was intrigued by the potential of figuration, representation, and narrative, which at the time had been largely pushed aside. There were never so many stylistic options to choose from and it seemed like anything could be called sculpture, except for sculpture. The cynical spirit of Duchamp presided.

I like earth matter and the unified labor of mind, eye, body, and hand. I work directly with the time-honored sculptural forms, processes, and materials of the statue maker, and try to activate their potential now. I find a rigorous and relevant tension there: a kind of adventure. These include stone carving, clay modeling, ceramic, lost-wax bronze casting, and direct plaster.

I am interested in hierarchies: social, spiritual, and personal. I favor hybrid forms. I play with the tradition of erecting figural monuments to past heroes, decisive battles, and religious personages. The work often assumes the shape of the statue, equestrian, sculpture group, relief, figurine and shrine forms. Finished works depict a heroic stance but incongruously seem to fall apart at the same time. During the process, I imagine myself to be a monument maker charged to create a big piece for a public square, and make many studies. Sometimes the studies themselves become the work.

The configuration of figure and pedestal is germane: the base functions as an integral carrier of meaning and as physical support too. Here I tend to juxtapose strong, opposing figurative and abstract imagery. I make work groups with multiple, small objects that occupy horizontal space and large monoliths that rise up. Like the writing of a long novel, these can take many years to complete. I enjoy the long process of weaving together meaning and form. Recently, the exhibitions resemble a cross between an abandoned sculptor’s studio, storage, and the secondhand shop.

For a very long time, themes of fragile manhood run through the work.