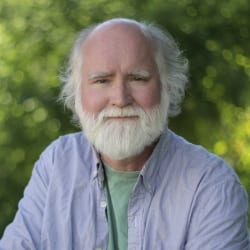 Nicholson Baker was born in Manhattan in 1957 and grew up in Rochester, New York. He played bassoon for a year at the Eastman School of Music and then transferred to Haverford College, majoring in English literature. He has published sixteen books--including The Mezzanine (1988), U and I (1991), Human Smoke (2008), The Anthologist (2009), and Substitute (2016)--and his work has appeared in The New Yorker, The Atlantic, Harper's, the New York Review of Books, Best American Short Stories, and Best American Essays. He has received a National Book Critics Circle award, a James Madison Freedom of Information Award, the Herman Hesse Prize, and the Katherine Anne Porter Award from the American Academy of Arts and Letters.

In 1999, Baker and his wife, Margaret Brentano (co-author of The World on Sunday, 2005), founded the American Newspaper Repository in order to save a large collection of U.S. newspapers. The collection includes bound runs of the New York Herald Tribune, the New York Times, the Chicago Tribune, and Joseph Pulitzer's influencial daily, the New York World. In 2004 the Repository’s holdings became a gift to Duke University. Baker and Brentano have two children; they live on the Penobscot River in Maine.

Baker is currently writing about government secrets and the Freedom of Information Act.