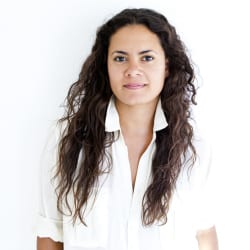 Nicole Miller is an artist working mainly with video, she lives and works in Southern California. Miller’s work stems from the possibility representation allows for reconstitution. Using video installation and sculpture, Miller proposes that active viewing can be used as a tool to reconstitute personal histories, or even one's own body.

Miller has had solo exhibitions in several institutions including, Marfa Ballroom, Centre D’art Contemporain Geneva, Kunst Werk Berlin, the California African American Museum, Tucson Museum of Contemporary Art, The Highline NYC and The LA County Museum in Los Angeles. Nicole also has been included in many group shows and Biennials, at places such as The Studio Museum in Harlem, The LA Biennial at the Hammer museum, Musée d'art contemporain de Lyon, and The San Francisco Museum of Art. Miller was recently in Rome as a prize winner at the American Academy Rome and has also received The William H Johnson Prize, the Rema Hort Mann prize, Louis Comfort Tiffany prize and the Artadia Los Angeles award. Her work is in the collections of the LA County Museum, the Hammer Museum, and SFMOMA amongst other institutions.