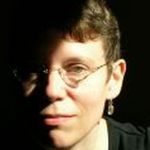 In 1988, at the tender age of twenty, I left my hometown of Urbana, Illinois, for Santa Cruz, California, to fulfull a naive dream of becoming a new-age, crystal-wielding hippie.  Instead I became a cynical cartoonist. Nina’s Adventures, my semiautobiographical, often experimental, not-quite-underground alternative weekly comic strip, first appeared in the Santa Cruz Comic News  and soon spread to the LA Reader, Comic Relief Magazine, the Funny Times, and the San Francisco Examiner.  I also created two solo "alternative" comic books for Dark Horse Comics, and various shorter pieces were published in anthologies by Last Gasp, Rip Off Press, the feminist Laugh Lines Press, and Kitchen Sink Press.  My weeklies were published in two paperback collections–Depression is Fun and Nina’s Adventures–and appeared in the large Japanese artist volume Jarebong.

Nina’s Adventures was a labor of love, but it didn’t pay the rent.  After seven years, I succumbed to courtship by major syndicates, releasing my first mainstream daily, Fluff, with Universal Press Syndicate. Fluff enjoyed a modest run in about forty mainstream newspapers worldwide, but the monotony of drawing the same characters, the same way, every day, with no significant experimentation, led to premature comics burn-out.  After two long years, I resigned. But my boredom with comics drove me to seek thrills in a more challenging medium: animation.

I shot my first film, Luv Is . . . , in one week with a vintage super-8 camera, using stop-motion clay puppets and a cardboard set on my living room table.  I expected Luv Is . . .  to be a throwaway, but it enjoyed many screenings in San Francisco (where I’d moved in 1991) accompanied by Nik Phelps and the Sprocket Ensemble.  Encouraged, I went on to make three more films in 1998, each exploring a different medium or technique: Cancer (drawing and scratching on 35mm), I Heart My Cat (16mm stop-motion), and Follow Your Bliss (traditional pencil and ink on paper).  These films screened at many festivals worldwide; I Heart My Cat won the Olympia, Washington, Film Festival’s Audience Choice first prize in 1999, and Luv Is . . . still screens all over Europe, thanks to Berlin Interfilm Distribution.

In 1999 I made the world’s first completely cameraless IMAX film, Pandorama. This would not have been possible without over $20,000 worth of in-kind donations I received from Kodak and CFI Labs in Los Angeles.  Imagica USA donated print-down services, and 35mm prints of Pandorama circulated at major festivals worldwide in 2000 and 2001, including Paris, Bilbao, Moscow, St. Petersburg, Ottawa, and Berlin.  The single 70mm (IMAX) print enjoyed a year-long run as a short feature in Berlin’s Cinestar IMAX theater; it also played at special events and symposia at La Geode, Paris; the California Science Center, Los Angeles; and IMAX theaters in Frankfurt and San Francisco.

Meanwhile, I received a grant from the Film Arts Foundation to produce Fetch! (2001), a short film incorporating optical illusions.  Although I spent only three months animating it, Fetch! took three years to produce, as I was held up by the draining business of raising additional funds to pay musicians, sound engineers, and film labs. The result was worth it, and Fetch! has enjoyed tremendous popularity, playing in countless film festivals internationally.  Much to my surprise, it’s been a favorite of children’s film festivals (Chicago International Children’s Film Festival, BAM Kids’ Film Festival, Northwest Childish Film Festival); a jury of children awarded it First Prize at the Nisan, Germany, KinderFest in 2008. I did not create Fetch! for children, but they seem to enjoy it, and its clear, simple narrative and absence of social and political issues make it more accessible than my other films.

Enough with accessible children’s films! thought I, as I plunged headlong into a controversial series about overpopulation and the environment.  The centerpiece of this trilogy, which I now call my "Fertility Cycle," was the three-and-a-half minute The Stork (2002), in which a serene natural landscape is bombed by bundles of joy.  I expected the film to be extremely unpopular, and possibly end my animation career; although I was now confident in my abilities as an animator, I knew the subject matter would anger viewers.  The Stork did anger some, but much to my surprise it was my most successful film yet, winning first prize at the EarthVision Environmental Film Festival and an unsolicited invitation to Sundance (2003).  This experience confirmed that taking great risks in art can lead to greater rewards.  I also experienced a powerful catharsis; once The Stork and my other population films were completed, I was relieved of a huge burden of anger.  I truly exorcized some demons with that project.

I have more demons, of course.  In June 2002 I moved to Trivandrum, India, following my (American) husband, who had taken a job there. Upon my arrival I was confronted with his midlife crisis, a complete emotional withdrawal.  This left me without support in a city in which women were second-class citizens, unable to walk alone at night, and not expected to have an identity separate from their husbands.  It was in Trivandrum I encountered the Indian epic The Ramayana for the first time.  Like many westerners, I initially considered The Ramayana little more than misogynist propaganda. Meanwhile, I was in the midst of developing a new comic strip for King Features Syndicate, The Hots. After three months in Trivandrum, King Features flew me to its New York headquarters for a launch meeting.  Then my husband dumped me by email.

Unable to return to my former apartment in San Francisco, or my new apartment in Trivandrum, I moved to Brooklyn.  My professional life benefitted, as I began teaching animation at Parsons School of Design and acquiring New York freelance clients.  Emotionally, however, my relocation commenced a terrible year of grief.  The Ramayana took on new depth and meaning to me.  It no longer resembled a sexist parable; rather, it seemed to capture the essence of painful relationships, and describe a blueprint of human suffering.  My grief and longing for the man who rejected me increasingly resembled Sita’s; my husband’s withdrawal reminded me of Rama.  In Manhattan I heard the music of Annette Hanshaw for the first time.  A radio star of the late 1920s, Hanshaw specialized in heartfelt blues and torch songs.  In my grief-addled state, her songs, my story, and The Ramayana merged into one: Sita Sings the Blues.

Originally, I hoped to expel my demons of heartbreak with a single short film, Trial By Fire (2003). This set a pivotal scene from The Ramayana, Sita’s walk through a funeral pyre, to Annette Hanshaw’s 1929 rendition of Mean to Me. Trial By Fire won second place in New York’s 2004 ASIFA-East Animation Festival, and screened in festivals in San Francisco, Latvia, and Red Bank, but I refrained from promoting it further.  Audiences loved the design and animation, but were not sufficiently familiar with The Ramayana to really understand the story.  Furthermore, my demons weren’t adequately expressed; I was still tormented by grief and heartache.  When another relationship failed in November 2004, I saw only one course of action: I had to tell the whole Ramayana story from Sita’s point of view. Sita Sings the Blues, a 72-minute feature, would be my salvation.

I began production in December 2004.  I have since completed twenty-minutes of animation, comprised of six musical chapters.  In April 2008, a popular weblog called BoingBoing reported on my work-in-progress; within hours, thousands of viewers were downloading the movie clips I posted online, temporarily shutting down my website.  Reviews began appearing on hundreds of other weblogs, all positive.  This was followed by print newspaper and magazine coverage in Switzerland, Korea, and India, as well as India Abroad in New York.  Artwallah, Los Angeles’ South Asian Arts Festival, solicited and screened a chapter called Dandaka Dharma, which also won an Excellence in Design award from ASIFA-East’s 2005 festival.

My subject matter is controversial.  While I’ve been greatly encouraged by the overwhelmingly positive response from desis (South Asian expatriates), some viewers in India have been outraged.  The Ramayana is a perplexing tale, and Sita is its most misunderstood character.  I’ve heard from more than one Hindu American woman that Sita Sings the Blues is the first Ramayana retelling that offers them a real connection to Sita.  My retelling is also humorous, which some people interpret as irreverent, and therefore an affront.  Not that this has any bearing on my work; as I learned from The Stork, the greater the risks in art, the greater the rewards. I have nothing but love and admiration for my source material now.  I hope to show how the genius of The Ramayana transcends societies and generations, and is as relevant today as it was 3,000 years ago.