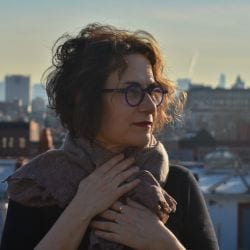 Noa Steimatsky’s scholarship engages with questions of medium, aesthetics, and cultures of the moving image through specific historical intersections. She is the author of Italian Locations: Reinhabiting the Past in Postwar Cinema (University of Minnesota Press, 2008). Her recent book, The Face on Film (Oxford University Press, 2017) won the Limina Prize for Best International Book in Film Studies, and an Honorable Mention by the Society for Cinema and Media Studies. Her essays have appeared in journals, anthologies, and catalogues, and have been translated to Italian, French, Portuguese, and Hebrew.

Steimatsky was faculty member at Yale University’s Department of the History of Art, and at the University of Chicago where she earned tenure in Cinema and Media Studies. She now lives with her family in New York City. Through the years she advanced her research with the support of fellowships and awards including the Fulbright, the Getty Post-Doctoral Grant, the American Academy in Rome Prize, the American Council of Learned Societies senior-level Fellowship, and her recently-won National Endowment for the Humanities Fellowship.

As a Guggenheim Fellow, Steimatsky will be writing a book about Cinecittà’s vicissitudes through the 1940s. Her earlier essay on the use of the Fascist-built movie studio – which was to gain fame as “Hollywood on the Tiber” – as displaced-persons camp in the postwar era inspired a documentary film. Her new research has uncovered a vaster, often mind-spinning history, unraveling the studio’s uses as prisoners-of-war camp and as an intelligence center. Interlacing perspectives rarely joined in film scholarship, the project reflects on film culture and institutions, on cinematic space with its world-making and unmaking as bound up with mid-20th century experiences of violence, oppression, and mobilities. It radically alters received understandings of the relationship between cinema and war, entertainment and propaganda, the manufactured irreality of the movie studio and urgent human reality in a time of crisis.