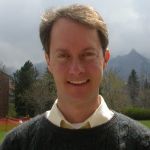 I am a Roman historian who has focused primarily on the later empire and its aftermath. Trained at Princeton, I was happy to return to my home state to work at the University of Colorado, Boulder in 1995. I began my career focusing on emperors and have now moved to slaves. My first book, Failure of Empire: Valens and the Roman State in the Fourth Century AD (University of California Press, 2002), focused on military and political history in the troubled years of the late fourth century. My edited book, the Cambridge Companion to the Age of Constantine (Cambridge UP, 2006), treats my favorite historical figure, about whom I am currently finishing another monograph. A second edited book on The Power of Religion in Late Antiquity (Ashgate Press) will appear this fall.

I am now composing a monograph on slavery in Late Antiquity which will attempt to chart the fate of this peculiar institution in the period between roughly AD 300 and 600. Previous studies have tended to posit a decline in slaveholding in this era, whether as a result of economic collapse or of Christianization. I will argue that there was no such decline, indeed that if anything the military and political chaos of Late Antiquity led to an increase in the practice of slavery.