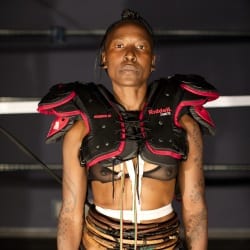 Born in Mutare, Zimbabwe and based in NYC, Nora Chipaumire has been challenging and embracing stereotypes of Africa and the black performing body, art and aesthetics since she started making dances in 1998. She is fluent in a few languages including one she coins as aesthetic qualities. She speaks this language through the use of time, space and effort to navigate cultural differences, create performance realms, teach and build relationships.

Her new work #PUNK 100%POP *NIGGA (verbalized as “Hashtag Punk, One Hundred Percent Pop and Star NIGGA”) will have its world premiere at The Kitchen in NYC in 2018. It is a three-part live performance album inspired by her formative years in Zimbabwe and the energy and rebellion of punk and 1980s New Wave music. Her other recent works include portrait of myself as my (2016). In it, she is joined by the specters of her estranged father. The stage transforms into a boxing ring, and together, they teeter between combat and play, challenging and exploiting stereotypes of black manhood.

In addition to live performance, she has been featured in several dance films and made her debut as film director in 2016 with the short film Afro Promo #1 King Lady. Other ongoing projects include chicken farming in Burkina Faso and creating “living archives” with contemporary dancers from tumbuka dance company in Harare, Zimbabwe. She also embarked on her long-term research project nhaka, which is a technology-based practice and process to her artistic work that instigates and investigates the nature of black bodies and the products of their imaginations. Her findings are documented in a digital book format that includes video, sound clips, drawings and text.

She is a three-time Bessie Award winner. She received the 2016 Trisha Mckenzie Memorial Award for her impact on the dance community in Zimbabwe. Her many awards include a Foundation for Contemporary Arts grant (2016), a Doris Duke Artist Award (2015), a Herb Alpert Award in the Arts (2012) and a United States Artist Ford Fellowship (2011). She has been supported by MAP Fund, National Performance Network Creation Fund, Doris Duke Charitable Foundation, the Jerome Foundation and The Joyce Theater Foundation (with support from the Rockefeller Foundation’s Cultural Innovation Fund). Her many commissions include Brooklyn Academy of Music, JACK and Peak Performances @ Montclair State University, among others.

She is a graduate of the University of Zimbabwe’s School of Law and holds a MA in Dance and MFA in Choreography and Performance from Mills College. She has studied dance in Africa, Cuba, Jamaica and the USA and has performed internationally in France, Italy, Japan, Senegal and Zimbabwe, among other places.