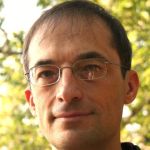 Ovidiu Costin studied physics as an undergraduate; between 1991 and 1995 he studied mathematics at Rutgers University, obtaining his Ph.D. in mathematics under the direction of Martin Kruskal.

From 1995 to 1998 he was a Dickson Instructor at the University of Chicago, and in 1998 he returned to Rutgers as assistant, and then associate professor.  He joined the faculty of the Ohio State University as Professor of Mathematics in 2005.

Since 1995 he has also held various visiting positions, at the Institute for Advanced Study, Princeton; the Mathematical Sciences Research Institute, Berkeley; Institute des Hautes Etudes Scientifiques; and other research institutes.

Ovidiu Costin has been interested in a variety of questions in analysis, working mainly on the foundations of generalized asymptotics and applications to ordinary and partial differential equations, mathematical physics, and general analysis.  He authored Asymptotics and Borel Summability (Chapman and Hall, 2008) and more than fifty scientific articles.  He is also interested in physics, the foundations of mathematics, and philosophy.