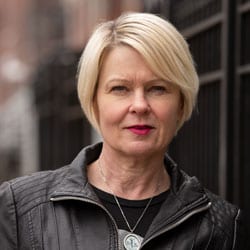 Pamela Robertson Wojcik is Professor in the Department of Film, TV and Theatre at the University of Notre Dame and Past President of the Society for Cinema and Media Studies. Guilty Pleasures: Feminist Camp from Mae West to Madonna (Duke 1996) established her reputation within performance and star studies. In recent years, her research has been central in shaping the spatial turn in cinema and media studies. The Apartment Plot: Urban Living in American Film and Popular Culture, 1945 to 1975 (Duke 2010) locates a philosophy of urbanism in narratives organized around apartment spaces. Fantasies of Neglect: Imagining the Urban Child in American Film and Fiction (Rutgers 2016) examines the figure of the spatially mobile urban child in relation to changing ideas of the urban, childhood, and neglect. Currently, Wojcik is completing a book about Gidget as a decades-long transmedia teen girl franchise. Wojcik's Guggenheim book project, Unhomed, examines America's ambivalent and shifting attitude toward placelessness through marginalized figures of precarious mobility, including tramps, hitchhikers, the homeless, and contemporary youth. Through an examination of film cycles from the 1920s to the present, she suggests that genres of precarity have been central to American cinema all along. Photo Credit: Mark Lind