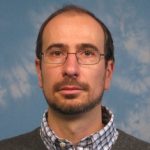 My research focuses on the role of hydrological processes in the functioning of terrestrial ecosystems. Starting from analyses of mechanisms underlying the coupling between hydrological processes and the biota, my research has contributed to the emergence of the relatively new field of ecohydrology. This research has provided a framework to investigate the role of soil moisture dynamics in biogeochemical cycles, vegetation water stress, ecosystem productivity, land-atmosphere interactions, and soil susceptibility to wind erosion. Through field observations and modeling studies I am investigating “new” mechanisms of desertification, which involve positive feedbacks between vegetation dynamics and resource availability or disturbance regime. These feedbacks include the interactions between fires and soil erodibility, vegetation composition and microclimate, or plant community and soil moisture. Similarly, I am investigating the role of positive feedbacks between vegetation and resource (e.g., nutrients, light, or energy) availability in dry tropical forests, freshwater woodlands, mangrove swamps, and seagrass meadows. I have also shown how environmental variability may increase the complexity of ecosystem dynamics by inducing new bifurcations, enhancing biodiversity, stabilizing vegetation dynamics, or inducing vegetation patterns. As a Guggenheim Fellow I will investigate how the global trade of massive amounts of food makes societies less reliant on locally available water resources, thereby allowing some populations to exceed the limits posed by their local water budget. The international trade of food commodities implies a virtual transfer of water resources from areas of food production to importing regions. While it is recognized that in the short term the establishment of a global network of virtual water transfer may prevent malnourishment and conflicts, its long-term effects on the coupled human-natural system remain poorly investigated. Therefore, I will investigate how in the long run the globalization of water resources may affect the societal resilience: in a world in which freshwater resources are shared in a food market, societies may turn out to be overall less capable of recovering from or reacting to water shortage or drought conditions.