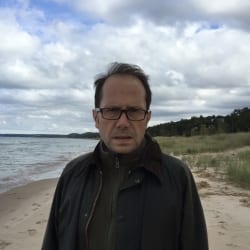 After stints teaching at American universities in Rome, Bologna, and New Haven, Paolo Squatriti reached Ann Arbor. There, working in the departments of Romance Languages and Literatures and of History, and lately in the Program in the Environment too, he became Professor in 2013. Two fellowships awarded by the ACLS and others by the University of Michigan enabled his research into topics like early medieval European earthworks, the dissemination of chestnut woods in the first millennium AD, and postclassical climate change. His findings were published by several American and British academic presses, by Past and Present, Speculum, Comparative Studies in Society and History, and by other leading historical journals. His monograph Landscape and Change in Early Medieval Italy (CUP, 2013) won a 2014 American Association for Italian Studies book award. He has been invited to lecture on pre-industrial environmental and landscape history in Italy, Germany, France, Canada, and the US; he has also served on panels and committees for German, Israeli, Belgian, Hungarian, Italian, and American educational institutions.

As a Guggenheim Fellow, Paolo Squatriti will analyze the impact on plant communities of such deeply human activities as barbarian invasions, state formation, and conversion to Christianity.