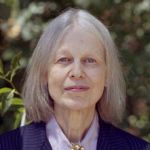 From 1981 to 1986 she created Fair Park Lagoon in Dallas, one of the earliest ecological artworks, where sculpture serves as causeways, bridges, seating, and islands that bring people into contact with functioning natural communities. From 1988 to 1995 she co-designed San Francisco’s new sewer, also known as “Endangered Garden,” a linear park along San Francisco Bay, incorporating tidal sculpture, butterfly meadow, habitat restoration, and a baywalk that coincides with the roof of the sewer.

Most recently Ms. Johanson has designed a small urban garden for the French government, and the 272-acre “Ellis Creek Water Recycling Facility” in Petaluma, California, which transforms sewage into drinkable water within the context of wildlife habitat and a public park. “The Draw at Sugar House” in Salt Lake City incorporates sculptural trails, canyons, and constructed wetlands into a journey that recalls pioneer landmarks while providing an under-highway pedestrian crossing and a new sculptural dam.

Her latest projects include a water garden along Lake Superior in Duluth that employs microbial communities and wetlands plants to purify storm water, and a land reclamation garden in Scranton, Pennsylvania, in conjunction with Marywood University and the Bureau of Abandoned Mine Reclamation.

Patricia Johanson’s work has been seen in over 150 exhibitions worldwide, and her drawings and models are in the permanent collections of the Metropolitan Museum of Art and Museum of Modern Art in New York City; Storm King Art Center, Mountainville, New York; National Museum of Women in the Arts, Washington, D.C.; and Dumbarton Oaks Contemporary Landscape Design Collection.