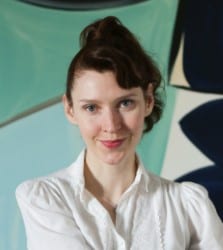 Patricia Treib is an American painter who lives and works in Brooklyn. Recent solo exhibitions have been held at Kate MacGarry, London (2019); Galerie Nordenhake, Stockholm (2018); Bureau, New York (2017); Galería Marta Cervera, Madrid (2016); and Crown Point Press, San Francisco (2018). She has participated in residencies at the American Academy in Rome (2017), the Dora Maar House (2014), and The MacDowell Colony (2013), and is a recipient of the 2017 Artadia Award. A monograph on Treib's work will be published this year, including an essay by Joanna Fiduccia and an interview with Ben Lerner. Treib's paintings are about perception and shifts of focus. While starting with specific sources that are personally meaningful—a still-life of cameras, a glass clock, a detail from a 15th century Russian icon painting—she approaches these objects by focusing on the spaces between things, on the less-namable aspects of what is being perceived. Although made in one sitting to sustain a sense of immediacy and directness, the paintings develop over time, through an accumulation of rehearsals. The aim has been to create a pictorial language that's personal but not private, always open and in flux.