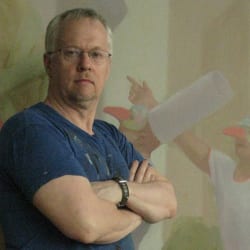 Patrick Webb paints Punchinello. His reinvention of the Italian clown from the Commedia dell’arte entered his work in 1990 as a gay everyman whose life is tragically cut short. Like Webb the clown survived. Punch has worked out in the gym, has run with Javalinas in Texas, and most recently has inhabited the roles found in the first verses of the Tinker Tailor rhyme.

Webb studied at the Maryland Institute/College of Art, Yale University and the Skowhegan School. He moved to New York City in 1981 after teaching at the University of Wisconsin/Oshkosh and Cornell. He has been a visiting artist at many schools and universities and now is a tenured professor at PRATT Institute. Webb’s work has been featured in eight solo shows in New York City. Most recently at The Painting Center, he installed the first eighteen panels of his ongoing exploration of Tinker Tailor. Webb’s 1992 diptych of a dying then deceased Punchinello is included in the Art AIDS America traveling exhibition arriving in New York City at the Bronx Museum in the fall of 2016.

Webb’s paintings are in numerous private and public collections including the Rose Art Museum, the Provincetown Art Museum, and the Leslie Lohman Museum of Gay and Lesbian Art. Webb received three NEA Awards, two Ingram Merrill Awards, an Art Matters Award, and the Thomas B. Clarke Award in Painting from the National Academy. His paintings are reproduced in several books on American art including Male Desire: The Homoerotic in American Art by Jonathan Weinberg, published by Abrams.