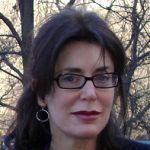 Patti Oleon is a painter who lives and works in San Francisco. Her work is about light and the tenuous nature of appearances.  She works from photographs she takes in public interior spaces, devoid of human presence, manipulating and layering them digitally to use as a blueprint to create haunting and amorphous paintings.  The final paintings are an amalgam of contradictions, blurring the line between the real and the artificial, the dark and the light, and the banal and the transcendent. She uses traditional Old Master oil painting techniques to create works that reference the past, yet are firmly rooted in the present.