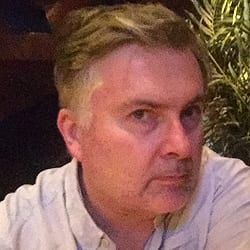 Paul O’Keeffe’s practice spans across sculpture and installation and often explores prosaic objects laden with personal histories. Common domestic items are taken as points of departure in his work, such as the book cover designs, wallpaper and furniture from his childhood in Ireland in the 60s and 70s, or the punk music he encountered while in art school in London. In some ways O’Keeffe’s sculptures can be understood as oblique portraits of his family and surroundings, returning to designs of everyday items and magazines found in his father’s small advertising agency in Dublin, or objects precious to his mother who moved to Ireland from Sri Lanka as a teenager. As an immigrant to the United States, many of his pieces have explored the forms he encountered in radically shifting contexts, first in his moves from Dublin to London, then to Los Angeles, and finally to Cleveland, Ohio.

Born in Dublin, Ireland, O’Keeffe attended St. Martin’s School of Art, London and the National College of Art and Design Dublin.He subsequently studied at UCLA through a Fulbright Travel Scholarship, where he received an MFA. A professor emeritus at Kent State University, O’Keeffe currently lives and works in Cleveland, Ohio. O’Keeffe has had solo and group exhibitions in New York, Los Angeles, Paris and Dublin, including at White Columns, NY; Temple Bar Gallery and Studios, Dublin; Cleveland Museum of Art, OH; Akron Art Museum, OH, Dorsky Projects, NY; among others. His work is in public and private collections including The Arts Council of Ireland; Bayer USA, Pittsburgh; Progressive Insurance, Cleveland; Kaiser Permanante, Cleveland and the Cleveland Public Library. He is the recipient of a number of awards including a Ford Foundation grant, twelve Individual Artist Excellence Awards from the Ohio Arts Council, an Arts Midwest/National Endowment for the Arts Award and awards from the Arts Council of Ireland.