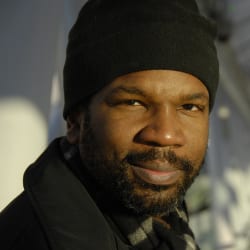 Paul Rucker (Baltimore, MD and Seattle, WA) is a visual artist, composer, and musician who often combines media, integrating live performance, sound, original compositions, and visual art. His work is the product of a rich interactive process, through which he investigates community impacts, human rights issues, historical research, and basic human emotions surrounding particular subject matter. Much of his current work focuses on the Prison Industrial Complex and the many issues accompanying incarceration in its relationship to slavery. He has presented performances and visual art exhibitions across the country and has collaborated with educational institutions to address the issue of mass incarceration. Presentations have taken place in schools, active prisons and also inactive prisons such as Alcatraz.

His largest installation to date, REWIND, garnered praise from Baltimore Magazine awarding Paul “Best Artist 2015.” Additionally, REWIND received “Best Solo Show 2015” and “#1 Art Show of 2015” from Baltimore City Paper, reviews by The Huffington Post, Artnet News, Washington Post, The Root, and The Real News Network. Rucker has received numerous grants, awards, and residencies for visual art and music. He is a 2012 Creative Capital Grantee in visual art as well as a 2014 MAP (Multi-Arts Production) Fund Grantee for performance. In 2015 he received a prestigious Joan Mitchell Painters & Sculptors Grant as well as the Mary Sawyer Baker Award. In 2016 Paul received the Rauschenberg Artist as Activist fellowship and the Smithsonian Artist Research Fellowship, for which he is the first artist in residence at the new National Museum of African American Culture.

Paul Rucker is an iCubed Arts Fellow embedded at the Institute for Contemporary Art at Virginia Commonwealth University.