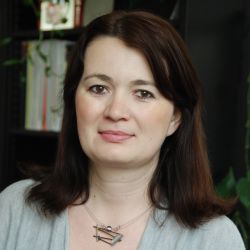 Paula Diaconescu joined the UCLA Chemistry & Biochemistry department in 2005, after spending two years as a postdoctoral fellow in the group of Professor Robert Grubbs at the California Institute of Technology. She obtained her Ph.D. degree under the supervision of Professor Christopher Cummins at Massachusetts Institute of Technology working on arene-bridged complexes of uranium. Her earlier education was completed in Romania, where she obtained her B.S. from the University of Bucharest and worked on coordination complexes of transition metals and lanthanides at the University Politehnica of Bucharest.

The Diaconescu group is interested in the design and synthesis of molecules such as metal complexes with specific geometric and electronic properties. Current research efforts focus on the design of reactive metal complexes with applications to small molecule activation, organic synthesis, and polymer formation. A new project in the group is redox switchable catalysis. This new area of chemistry is inspired by nature’s sensory processes and uses external agents as switches in order to control the catalytic activity of multiple species with different reactivity. The findings from this research project also further the understanding of fundamental aspects of catalysis.

Paula has co-authored more than 80 research papers, of which more than 55 are the result of her research group’s work at UCLA. Besides the Guggenheim fellowship, she received the Alfred P. Sloan Fellowship, the National Science Foundation CAREER Award, and the Friedrich Wilhelm Bessel Research Award from the Alexander von Humboldt Foundation. She has given more than 100 presentations nationally and internationally and is an editorial board member for the journals Inorganic Chemistry Frontiers and Organometallics.