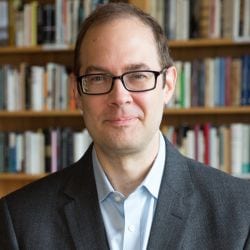 Peter J. Schmelz is a musicologist specializing in the music of the twentieth and twenty-first centuries, with a special interest in the music of Russia, Ukraine, and the former Soviet Union. He received a Ph.D. in the History and Literature of Music from the University of California, Berkeley in 2002. Professor Schmelz has written and published widely on a variety of topics in leading periodicals including the Journal of the American Musicological Society and the Journal of Musicology. His first book, Such Freedom, If Only Musical: Unofficial Soviet Music during the Thaw (Oxford, 2009), won an ASCAP Deems Taylor Award in 2010, and his article “Valentin Silvestrov and the Echoes of Music History,” published in the Journal of Musicology received an ASCAP Deems Taylor-Virgil Thomson Award in 2015. His book Alfred Schnittke’s Concerto Grosso No. 1 will be published by Oxford in May 2019.

Professor Schmelz is currently completing Sonic Overload: Alfred Schnittke, Valentin Silvestrov, and Polystylism in the Late USSR, a monograph generously supported through a National Endowment for the Humanities Fellowship in 2012. He was an Anna-Maria Kellen Fellow at the American Academy in Berlin in fall 2017, when he began the project that he will complete with his Guggenheim Fellowship on unofficial musical exchanges at the peak of the cold war in the 1960s between the Ukrainian SSR, Russian SFSR, and West Germany. Future projects also include a book on Soviet experimental music in the 1980s, including the music of Sergey Kuryokhin, the Ganelin Trio, Valentina Ponomaryova, and the group Auktsyon.

Professor Schmelz serves as co-editor of Indiana University Press’s Russian Music Studies series and also served as editor of the Journal of Musicology from 2014–2018. He currently teaches in the School of Music at Arizona State University, Tempe. Before coming to Arizona, he taught at the University at Buffalo (SUNY) and Washington University in St. Louis, where he also served as Chair of the Music Department.