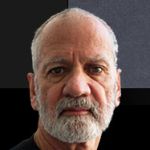 Since I’m the kind of painter—are there many?—who turns work to the wall, face in, when finished (I’d rather live with other people’s), and has no aesthetic or sociopolitical program behind my work (though I like to read about artists who do), my worst fear is that when a number of my pictures painted over thirty years go up in a gallery at once, I’ll stand revealed as scatterbrained to the point of possessing multiple personalities. I’m not that worried about people liking my painting, because I’m more or less used to their not liking it, most of the time. My abstract paintings are, I think, too craggy or disjointed or garish (although I have gone through a few elegant phases) to be generally likeable.  If there’s any commonality to my work from the beginning to the present, it’s that I simply want to paint paintings that are good-looking, albeit on my terms.  You’d think that someone who has also been an art critic all this time would have a better idea of what might constitute "good-looking" to people other than himself.

Not that I want to settle, mind you, for my painting being merely good-looking. Almost inevitably, it’s supposed to express something. The problem with the "objective correlative," as T.S. Eliot called it, is another matter.  First, what the painting expresses should be a little weightier than whether I’d had too much or too little coffee that day. To me, the paintings are, at bottom, all about an existentialist view of the world (awash in absurdity, with no God or spiritual harmonies to offer relief, like some sort of metaphysical elevator music; civilization held tenuously together with chewing gum and baling wire ….).  In my paintings there are, however, no forms with a thinly disguised symbolism lurking in their abstractness (at least, not as far as I can help it).  Even if there were, the last thing I’d want to do is inflict upon the viewer a long exegesis about them. In short, the existentialism is my problem.

Second, there’s an obvious tension between the painting actively expressing something—that is, "objectively" constituting a real "correlative"—and being "good-looking."  How much of one does a painter forsake to satisfy the other? With painting, the physical material itself often decides the question: when I just can’t do anything more to the painting without turning it into the beginning of another one, it’s done. The question then becomes whether or not to discard it.  (I haven’t deliberately thrown away many paintings because I’ve never been sure what one might tell me later, when I become retroactively curious and turn it out from the wall. This habit has its price; since most of my work has remained in my own possession, I’ve had to lug all these paintings with me as I’ve moved about the country.)

I started out as a painter and, since I genetically possess half of a plodding Teutonic temperament, I’ve stayed one. Connections to perhaps the deepest, richest mode of Western art since the fall of Rome have sustained my satisfaction with painting, but sheer force of habit has also played a large part in my using the medium.  Not to mention circumstance—if I’d been born in 1841 instead of 1941, I’d probably have been a printer’s apprentice; had I been born in 1981 instead of 1941 I’d likely be doing something digitally interactive. Nevertheless, I really do think that there’s something there in painting, especially abstract painting, that one just doesn’t get elsewhere. I only hope that my paintings, whatever their drawbacks, might convince a few susceptible, talented young artists, and open-minded viewers likewise.