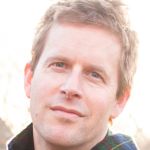 Peter Rock is the author of six novels, most recently The Shelter Cycle and My Abandonment, and a collection of stories, The Unsettling.  His books have been translated into several languages, and his stories have appeared in magazines such as Zoetrope: All-Story, Tin House, Epoch, and Ploughshares; they have been anthologized widely. Rock was born and raised in Salt Lake City, Utah.  He attended Deep Springs College, received a B.A. in English from Yale University, and held a Wallace Stegner Fellowship at Stanford University.  The recipient of a National Endowment for the Arts Fellowship and various other awards, he is a Professor in the English Department of Reed College and lives in Portland, Oregon, with his wife and two fierce young daughters. In the past, Rock has worked as a ranch hand, a subject in medical trials, a temp, and a museum security guard.  This last occupation gave rise to the project for which he proposed a Guggenheim Fellowship:  Spells is a fragmentary novel with photographs; a collaboration with five photographers, it may take the form of a book, an installation in a gallery, and/or on the web. Follow this link for an example of such a fragment: "Hello."  A more detailed description of the project is available on Rock’s website.