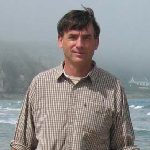 Peter Clark is a Professor of Geology and Geophysics in the College of Earth, Ocean, and Atmospheric Sciences at Oregon State University, where he has been on the faculty since 1988. He began his undergraduate studies at St. Lawrence University as an English major, but discovered geology his freshman year through an introductory course where he learned that he could study the glaciated landscapes of the Sierra Nevada and Rocky Mountains in which he had spent so much time hiking and fishing as a teenager. He received his undergraduate degree in Geology from St. Lawrence University in 1978 and his M.Sc. from the University of Waterloo in 1980. His interest in the glacial landscapes of the Arctic then led him to the Institute of Arctic and Alpine Research, University of Colorado, where he received his Ph.D. in Geological Sciences in 1984 under the supervision of Dr. John T. Andrews.

Peter Clark is well known for his research on the interactions of ice sheets and the global climate system as well as sea-level change on a range of timescales. Much of his work involves collaboration with geophysicists, geochemists, and climate modelers in order to address the complex range of issues associated with climate and sea-level change. He has authored or coauthored more than 120 peer-reviewed papers, including twenty-four in Nature and Science, as well as co-edited three highly successful books. He was a Coordinating Lead Author for the U.S. Climate Change Research Program report on “Abrupt Climate Change,” and is currently a Coordinating Lead Author for the chapter on “Sea-Level Change” for the Intergovernmental Panel on Climate Change (IPCC) Fifth Assessment Report. Recognition for his research activities include the Easterbrook Distinguished Scientist Award from the Geological Society of America, the F. A. Gilfillan Memorial Award for Distinguished Scholarship in Science from OSU, and election as a Fellow of the American Geophysical Union and the Geological Society of America. He has also received the Silver Circle Award for Excellence in Undergraduate Teaching from the University of Illinois and the Carter Award for Outstanding and Inspirational Graduate Teaching from OSU.

During his time as a Guggenheim Fellow, Peter Clark plans to further develop a recent interest in ice sheet-ocean interactions and their influence on climate and the carbon cycle.