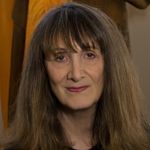 Raised in Canada, Phyllis Green moved to California to pursue graduate studies in art. She received an M.F.A. from UCLA in 1981, and began her professional career as an artist, educator, and curator in Los Angeles. Her practice integrates gender politics, the sphere of craft, and influences of modernism. Green is primarily an object maker who represents the body. Over thirty years, these bodily surrogates have taken the form of skeletal fragments, organs, and containers. They appear as multimedia objects that are assembled from a variety of materials and often refer to formative examples of modern and contemporary art. Green’s work has been exhibited extensively in exhibitions nationally and internationally, including From Head to Toe: Concepts of the Body in 20th Century Art, Made in California: Art, Image, and Identity, both at the Los Angeles County Museum of Art, and Fiction @Love at MOCA, Shanghai. A survey exhibition titled Splendid Entities: 25 Years of Objects by Phyllis Green was presented at Otis College of Art and Design, Los Angeles, in 2011. She is the recipient of individual artist's fellowships from the National Endowment for the Arts,California Arts Council, and Pollock-Krasner Foundation; and was among the first group of artists to be awarded a C.O.L.A. grant by the City of Los Angeles in 1996. In 2010 she received project grants from the City of Santa Monica and the Durfee Foundation. Green has lectured in colleges and universities worldwide and has held teaching positions at UCLA and Loyola Marymount University in Los Angeles. She is currently an adjunct faculty member at the Roski School of Art and Design at the University of Southern California. She produced and hosted a radio show on the visual arts, LOOK/ hear, on KXLU: 88.9FM from 1996 to 1998. She was appointed to the Santa Monica Arts Commission in 2000, and elected Chair from 2004 to 2006. Green served as Guest Curator for Scripps College 64th Ceramic Annual in 2008.  She is currently Deputy Director of The Christopher Isherwood Foundation. Profile photograph by Wayne Shimabukuro