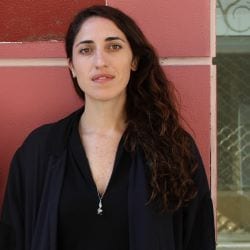 Pia Borg (b.1977) is an Australian filmmaker based in Los Angeles. Working with archival footage, CGI animation and performed re-enactments, Borg's films portray historical and cultural events, chronicling psychological phenomena like false memory syndrome, collective hysteria and the opal fever surrounding extractive industries. She is the recipient of numerous prizes including the Golden Leopard for best international short (Locarno Film Festival 2014) for the documentary Abandoned Goods. Her latest short film, Demonic premiered at Semaine de la Critique (Critics Week) Cannes Film Festival 2019.  The film was recently nominated for an Australian Academy of Cinema and Television Arts Award. Her film Silica was installed in the Maltese Pavilion of the 57th Venice Biennale (May-Nov 2017) and was awarded prizes at the AFI fest, Ann Arbor, 25 FPS and Tacoma Film Festival. In 2015, she was named as one of the 25 New Faces of Independent Film in Filmmaker magazine. Borg has recently had solo screenings of her films at REDCAT, Los Angeles, Museum of Moving Image, New York, ICA, London and Cineteca, Mexico City. In 2014 she joined the faculty of California Institute of the Arts where she is currently the Associate Director of the Experimental Animation Program.