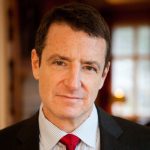 Pieter Judson, a Professor of History at Swarthmore College, specializes in modern European History, particularly the Habsburg empire. He came to prominence within his field with the publication of his very first book: Exclusive Revolutionaries: Liberal Politics, Social Experience, and National Identity in the Austrian Empire, 1848-1914 (1996), which he wrote with support of a Fulbright Fellowship, won the American Historical Association’s Herbert Baxter Adams prize and the Austrian Cultural Forum’s book prize. It also led to a commission from Böhlau Verlag for his next book Wien Brennt! (Vienna is Burning), an exploration of the role of liberalism in the revolutions of 1848 in the Austrian Empire, with its publication in 1998 coinciding with the sesquicentennial of those revolutions. His subsequent books firmly established him as one of the most highly respected historians of Central Europe working today:  Constructing Nationalities in East Central Europe (2004), which he edited with Marsha Rozenblit, and Guardians of the Nation. Activists on the Language Frontiers of Imperial Austria (2006). Guardians of the Nation received the American Association for the Advancement of Slavic Studies’ Barbara Jelavich Award and the Czechoslovak Studies Association’s inaugural book award in 2007, and in 2010 the Austrian government honored Judson with the Karl von Vogelsang prize, awarded every two years by the Ministry of Culture and Science for the best book in the social sciences. His current project, Everyday Empire: A New History of Habsburg Central Europe, 1780-1948, which he is completing during his Guggenheim Fellowship term, will be published by Harvard University Press. Judson has published more than three dozen articles in the popular press, in edited volumes, and in such scholarly journals as Annales. Histoire, Sciences Sociales, Contemporary Austrian Studies, and Geschichte und Region/Storia e regione.

Educated at Swarthmore (B.A., History and German Literature, 1978) and Columbia University (M.A., M.Phil., Ph.D., Modern European History), Judson was a Visiting Assistant Professor of History at New York University (1987-88) and an Assistant Professor of History at Pitzer College, Claremont Colleges (1988-1993) before he accepted a faculty appointment at Swarthmore. In addition to teaching courses in modern European History, the history of sexuality, and an honors seminar on European fascism, he has been the editor of Austrian History Yearbook since 2005
In addition to Guggenheim, Fulbright, and National Endowment for the Humanities fellowships, Mr. Judson has been a Whiting Foundation Fellow, a Marshall Fellow, a Senior Fellow at Vienna’s International Research Center for Cultural Studies, and Nina Maria Gorrissen Fellow at the American Academy in Berlin. Keen interest in his work has led to his being invited to lecture around the world, including at Harvard University, the Herder Institute in Marburg, the Slovak Academy of Sciences in Bratislava, the University of Vienna, the University of Edmonton, and the Rockefeller Foundation Conference Center at Bellagio, Italy.
Profile photograph by Annette Hornischer.