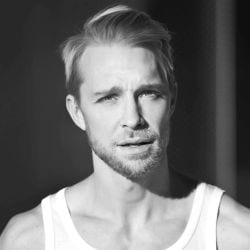 Choreographer, filmmaker and dancer, Pontus Lidberg has firmly established himself as a creative and visionary artist, merging dance and film.

His dance film, The Rain received numerous awards. The New York Times wrote “memorably, The Rain illustrates what filmed dance can say that staged dance cannot.” His film Labyrinth Within won Best Picture at the Dance on Camera Festival in 2012. He was nominated for a New York Dance and Performance Award (Bessie) in Outstanding Visual Design, for his dance and film evening WITHIN (Labyrinth Within)—created during his 2012 tenure as Resident Artistic Director of Morphoses. The New York Times applauded this contemporary story ballet, “told without mime and driven by emotional and psychological textures… [Lidberg] sublimates the academic language of ballet, dissolving it into knotty partnering that manages, by and large, to avoid the churning clichés of much contemporary movement in the form. It is refreshing to see a ballet embracing the virtues of restraint.” Raised in Stockholm, Sweden, Lidberg trained at the Royal Swedish Ballet School. He holds an MFA in Contemporary Performing Arts from the University of Gothenburg, Faculty of Fine, Applied and Performing Arts. He is the Artistic Director of Danish Dance Theatre in Copenhagen, Denmark.

“In this frenzied and invigorating race, Lidberg makes you feel all the harmony that can exist between two beings... one would almost believe that love stories never end badly. Sublime.”
François Delétraz, LE FIGARO MAGAZINE, February 22, 2019

“Siren has all the features of a masterpiece... A work both delicate and dense with a feeling of truth, sustained by a rare expressive clarity”
Anna Bandettini, LA REPUBBLICA, September 2, 2018

“Rabbit, Swedish choreographer and filmmaker Pontus Lidberg’s ode to childhood, is so wonderfully precise, so cleverly comedic that it’s akin to watching a dozen wind-up toys set off at the same time.”
Vanessa Keys, THE TELEGRAPH, April 21, 2016

“Pontus Lidberg has an aura of a refined creator and a state of grace, his work breathes the same.”
Roger Salas, EL PAIS, July 18, 2015

“Pontus Lidberg’s eponymous New York-based company brought an elegant Nordic aesthetic and seamless movement to intense choreography in which groups shift and change in an exploration of the psyche. Underpinning his work are a subtle theatricality and a taste for the unexpected”
Gerald Dowler, THE FINANCIAL TIMES, November 4, 2014