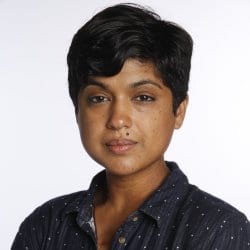 Pramila Vasudevan is a choreographer and interdisciplinary artist based in Minneapolis. She has a combined 30+ years of experience in Bharatanatyam (classical Indian dance) and contemporary Indian dance, plus a B.F.A. in Interactive Media and a B.A. in Political Science, all which inform her interdisciplinary voice and socially conscious performance practice.

Vasudevan is the founder and Artistic Director of Aniccha Arts (2004), an experimental arts group producing site-specific performances that examine agency, voice, and group dynamics within community histories, institutions, and systems. Aniccha Arts is best known for the all-night outdoor performance project 'Census' (2016) and 'In Habit: Living Patterns' (2012), both commissions of Northern Lights.mn that were experienced by thousands of audience members through the Northern Spark Festival; and 'Every Other' (2015), a site-specific installation performance at the Grain Belt Studios, which was nominated for an ‘Outstanding Performance’ Sage award. Aniccha Arts also has been commissioned by the Walker Art Center, to develop and present F6 as part of the Momentum: New Dance Works series (2013), and by the Weisman Art Museum, as part of the ‘Clouds: Temporarily Visible’ exhibit (2016).

Vasudevan is a 2016 McKnight Choreographer Fellow. Currently, she is a resident artist at Pillsbury House Theatre and the Southern Theater (as part of their ARTshare program). Major influences and teachers include Dr. Bala Nandakumar, Roshan Vajifdar Ghosh, Ranee Ramaswamy, Nirmala Rajasekar, Dr. Ananya Chatterjea, Piotr Szyhalski, and Steve Dietz. In the last few years, she has been studying embodied performance with Otto Ramstad and Olive Bieringa and butoh with Gadu. In addition to her own practice, Vasudevan is the Director of Naked Stages, a fellowship program for emerging performance artists at Pillsbury House Theatre; and a Teaching Artist with Upstream Arts, which activates and amplifies the voice and choice of individuals with disabilities at every stage of life.