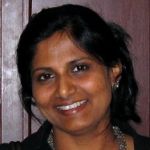 Priya Natarajan is a Professor of Astronomy and of Physics at Yale University. She received bachelor’s degrees in both Physics and Mathematics from MIT (1991) where she was also the recipient of a Peter J. Eloranta Fellowship; the Burchard Fellowship and the Carroll Wilson Award during her undergraduate years. Intending to pursue a Ph.D. in both Astrophysics and Philosophy of Science, supported by an Ida Green Fellowship (1991-93), she began her doctoral studies in the Program in Science, Technology and Society in the History and Philosophy of Science. However on being awarded the Isaac Newton Studentship she switched to pursue her doctoral work at the Institute of Astronomy at the University of Cambridge, receiving her Ph.D. in 1998. During her time there, in 1993, she was elected a member of the Cambridge Philosophical Society and a Fellow of the Cambridge Commonwealth Society. She was elected to a Title A Research Fellowship at Trinity College that she held from 1997 to 2003. She spent time as a research fellow at the Canadian Institute for Theoretical Astrophysics (Toronto) prior to joining the faculty at Yale.

Professor Natarajan’s scientific accomplishments include several key calculations pertaining to the life cycle of supermassive black holes in the Universe including the discovery of the existence of an upper mass limit for black holes; her efforts to map in detail the spatial distribution of dark matter in cosmic structures exploiting the phenomenon of gravitational lensing; and her use of clusters of galaxies in order to better understand dark matter and dark energy. During her Guggenheim Fellowship term, she will be studying black hole formation at high redshift.

Among her recent honors are a National Academy of Sciences’ Kavli Frontiers Fellowship (2006); election to a Whitney Humanities Fellowship at Yale (2006), and a Radcliffe Fellowship at Harvard’s Radcliffe Institute for Advanced Study (2008-09); award for achievement in the sciences by the Global Organization of the People of Indian Origin (2009); the Face of the Future Award (2009) from the India Abroad Foundation; and the Sophie & Tycho Brahe visiting professorship at the Dark Cosmology Center of the Niels Bohr Institute in Copenhagen (2009). In addition, she was recently admitted to the Royal Astronomical Society.

Priya Natarajan is not only a gifted teacher and researcher, but is also a published poet and wrote a regular popular science column for Asian Age (from 2005-2008).

She has contributed articles and her work has been profiled in several magazines and television programs, including the BBC series titled Stephen
Hawking’s Universe. She is deeply invested in the public dissemination of science and is currently a member of the Science Advisory Board for the public television series NOVA.