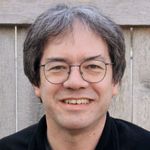 Larry Edwards is a geologist with interests in climate history, climate change, and geochronology. He is the George and Orpha Gibson Chair of Earth Systems Science and Distinguished McKnight University Professor at the University of Minnesota.

He was born in Boston, Massachusetts. His father, Richard Edwards, is from a distinguished American family descended from the Reverend Jonathan Edwards and his mother, the late Vee Tsung Ling Edwards, was from China. He and his three sisters grew up in Ann Arbor, Michigan. His family traveled extensively in Asia.

Perhaps, in part, because of his biracial upbringing and exposure to other cultures at an early age, he has broad interests. As an undergraduate he studied both geology and photography, earning degrees in Earth and Planetary Sciences and in Art and Architecture from the Massachusetts Institute of Technology in 1976. In the late 1970s, while working as a naturalist for the National Park Service, he spent many weekends in the wilderness outside of the small town of Bigfork, Minnesota, learning the ancient art of birch bark canoe building from the master builder, the late Bill Hafeman.

After flirting with the idea of studying medicine, Larry Edwards returned to the Earth Sciences, earning his master’s degree in Geological Sciences from the University of Michigan in 1986, mentored by E. J. Essene, and his Ph.D. in Geochemistry from the California Institute of Technology in 1988, mentored by G. J. Wasserburg. Upon completion of his graduate studies, he took a position as an assistant professor at the University of Minnesota in the Department of Geology and Geophysics and has remained there since.

Larry Edwards is well-known for his role in the development of modern uranium-thorium dating methods, which he uses to fix the timeline of climate history. He has furthered our understanding of the causes of climate change, by establishing the timing and pattern of past climate change. His approaches have been used to determine the timing of the ice age cycles and to improve the accuracy of radiocarbon dating. He champions cave deposits as recorders of the timing and nature of climate history. He and his large international group of collaborators are currently working on piecing together hundreds of thousands of years of Asian monsoon history from caves in China. Using innovative strategies, he relates his cave climate histories to those from ocean sediments and from ice cores, thereby establishing patterns of changing climate in time and space.

His work has helped us characterize and understand the causes of abrupt climate change, rapid shifts (in some cases less than a decade), which altered climate dramatically over much of the globe. His research has also helped us understand why the ice age cycles ended with such rapid disintegration of the ice sheets that had covered northern North America and northern Eurasia. One of his group’s most recent studies suggests that changes in the monsoon contributed to the demise of some of the Chinese dynasties, as well as the dramatic population increase and expansion of rice cultivation at the beginning of the Northern Song Dynasty, a thousand years ago. This same study also shows that regional changes in late twentieth-century monsoon are anomalous compared to earlier times, likely because of human activity. During his time as a Guggenheim Fellow, Larry Edwards plans to lay the groundwork for extending his monsoon records further back in time.