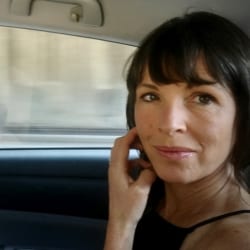 Rachel Cusk is the author of nine novels, three non-fiction works, a play, and numerous shorter essays and memoirs. Her first novel, Saving Agnes, was published in 1993. Her most recent novel, Kudos, the final part of the Outline trilogy, will be published in the US and the UK in May 2018.

Cusk’s novels have won and been shortlisted for numerous awards. She was named one of Granta’s Best of Young British Novelists in 2003. Her version of Euripides’ Medea was directed by Rupert Goold and was shortlisted for the Susan Blackburn Smith Award.

Cusk was born in Canada in 1967 and spent her early childhood in Los Angeles before moving to the UK in 1974. She studied English at Oxford and published her first novel Saving Agnes when she was twenty six, and its themes of femininity and social satire remained central to her work over the next decade. In responding to the formal problems of the novel representing female experience she began to work additionally in non-fiction. Her autobiographical accounts of motherhood and divorce (A Life’s Work and Aftermath) were groundbreaking and controversial.

Most recently, after a long period of consideration, she attempted to evolve a new form, one that could represent personal experience while avoiding the politics of subjectivity and literalism and remaining free from narrative convention. That project became a trilogy (Outline, Transit and Kudos). Outline was one of The New York Times’ top 5 novels of 2015. Judith Thurman’s 2017 profile of Rachel in The New Yorker comments: “Many experimental writers have rejected the mechanics of storytelling, but Cusk has found a way to do so without sacrificing its tension. Where the action meanders, language takes up the slack. Her sentences hum with intelligence, like a neural pathway.”