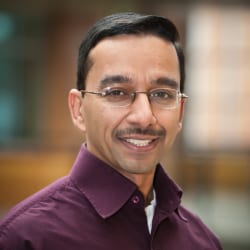 Rajesh Rao is the Director of the Center for Sensorimotor Neural Engineering and Professor of Computer Science and Engineering at the University of Washington (UW) in Seattle, USA. He received his PhD from the University of Rochester and was a postdoctoral fellow at the Salk Institute for Biological Studies before joining UW.

Rajesh's research spans the areas of computational neuroscience, artificial intelligence, and brain-computer interfacing. With his collaborators, he has proposed theories of how the brain might work based on computational ideas such as predictive coding, Bayesian modeling, and reinforcement learning. He has proposed new methods for robotic learning based on how children learn by watching and imitating others. Additional details can be found at the Neural Systems Lab webpage.

Rajesh is also exploring how signals from the brain can be used to directly control robots and other devices through brain-computer interfaces. His group was the first to demonstrate direct brain control of a humanoid robot in 2006 and direct brain-to-brain communication between humans in 2013. Rajesh's other interests include classical Indian art, especially Indian miniature painting, and the 4000-year-old undeciphered Indus script, a topic on which he has given a TED talk.

Rajesh has received several awards including a Fulbright Scholar award, an NSF CAREER award, a Young Investigator Award from the Office of Naval Research, a Sloan Faculty Fellowship, and a Packard Fellowship for Science and Engineering. He is the author of an introductory textbook Brain-Computer Interfacing (Cambridge University Press, 2013) and has co-edited two volumes, Probabilistic Models of the Brain (MIT Press, 2002) and Bayesian Brain (MIT Press, 2007).