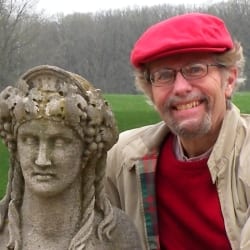 Ralph Mathisen began his career in science (BS, Astronomy-Physics, Wisconsin) and engineering (MS, Mechanical Engineering, Rensselaer), and initially worked in the aerospace industry on the design team for the JT9D engine for the Boeing 747. Ralph then turned to Classical Studies, and received an MA in Classical Languages and a Ph.D. in Ancient History from Wisconsin. After a lengthy stint, ultimately as Louise Fry Scudder Professor of Humanities, at the University of South Carolina, Ralph now is Professor of History, Classics, and Medieval Studies at the University of Illinois at Urbana-Champaign. Ralph also has a life beyond the academic world; when he is not trying to make sense of the decline and fall of ancient empires he also enjoys running, skiing, traveling, and ballroom dancing.

Ralph studies the ancient world, with specialties in prosopography, numismatics, computer applications, and the society, culture, and religion of Late Antiquity. He has published more than eighty scholarly articles and written or edited thirteen books. He is the Editor of Oxford Studies in Late Antiquity; the Founding Editor and Editor Emeritus of the Journal of Late Antiquity; past President of the Byzantine Studies Association of North America and the Society for Late Antiquity; and a Fellow of the American Numismatic Society. Under his editorship, the Journal of Late Antiquity won the “Codex Award,” of the Council of the Editors of Learned Journals for distinction in the ancient and medieval periods, and the “PROSE Award” of the Association of American Publishers as Best New Journal in the Social Sciences & Humanities for 2010.

Before being appointed as a Guggenheim Fellow, Ralph received support from the American Council of Learned Societies, the American Philosophical Society (twice), the National Endowment for the Humanities (twice), the European Science Foundation, the British Academy, the Andrew W. Mellon Foundation, and the George A. and Eliza Gardner Howard Foundation.

Ralph’s Guggenheim project takes a new look at one of the most portentous events in human history, the end of the western Roman Empire during the fifth century CE, a process often seen as representing an archetypical conflict between barbarians and barbarism on the one hand and Romans and civilization on the other. Modern models envisage a feeble western empire conquered by invading hostile barbarians. This project creates a “unified theory” to explain the end of the western Roman Empire without the need for dramatic intervention by adversarial barbarians who destroyed classical civilization and created the “Dark Ages.”