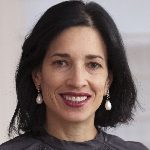 Ramie Targoff is Professor of English and Director of the Mandel Center for the Humanities at Brandeis University. She teaches courses on Shakespeare, Renaissance literature, love lyrics, witchcraft and magic, and devotional poetry. She received her B.A. in English from Yale University in 1989, and her Ph.D. in English from the University of California, Berkeley, in 1996. Ramie Targoff’s research focuses on Renaissance English literature, with an emphasis on the relationship between poetry and religion. She is the author of two books, Common Prayer: The Language of Public Devotion (University of Chicago Press, 2001), and John Donne, Body and Soul (University of Chicago Press, 2008), and the co-editor of Thomas Browne’s Religio Medici and Urne-Burial  (New York Review Books Classics, 2012). She has published articles and reviews in journals including Representations, PMLA, and Word and Image, and Renaissance Quarterly. Her Guggenheim project is entitled Posthumous Love: Eros and the Afterlife in Renaissance England. Posthumous Love explores the boundaries that English poets drew between earthly love and love that might transcend the grave. Why couples wanted to be buried together, how lovers imagined what awaited them after their deaths, and what might be gained—both emotionally and poetically—by imposing mortal limits on love, are the book’s central concerns. Chapters include investigations of sixteenth- and seventeenth-century epitaphs for married couples; the Petrarchan translations of Sir Thomas Wyatt; Protestant sermons and treatises on death and burial; Shakespeare’s Romeo and Juliet and its Italian sources; the Elizabethan sonnet series; and the carpe diem lyrics of the seventeenth century. Once completed, Posthumous Love will be published by the University of Chicago Press. Targoff has been the recipient of fellowships from the National Endowment for the Humanities (1995–96); the Wissenschaftskolleg zu Berlin (2003–04); and the American Council of Learned Societies (2009–10).  In the fall of 2012, she will be the American Academy in Rome Scholar in Residence.  She will spend the 2012–13 academic year in Rome with her husband, Stephen Greenblatt, who is also a Guggenheim Fellow (1974, 1982), and their son, Harry.