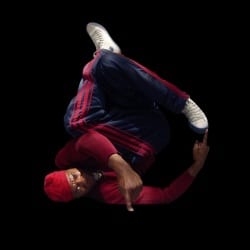 Raphael Xavier refers to himself as an Innovative Movement Conceptualists. As a practitioner of the dance element of the hip hop form since 1983, he has made Breaking his career in dance theatre as a choreographer with an exceptional approach to improvisation. Brenda Dixon Gottschild deemed Xavier as a fine rhythm technician who transforms a bravado dance style into an introspective meditation. His vision is to give the audience a new perspective on the way they see this highly physical dance and its association only with youth. The maturity of the body plays a major part in his decision making for choreography as it points to the sustainability and longevity of the form. Xavier has been working choreographically since 1996 but found his way to the concert stage in 1998 by way of Rennie Harris Puremovement in the acclaimed Rome & Jewels-A Hip Hop Love Story.

Leaving his home town of Wilmington, Delaware to pursue a career in photography in 1998, Xavier took an unexpected detour and toured the world with RHPM. He saw first hand the possibilities of performing dance on stage. 1999-2002 he was funded by the Pennsylvania Council on the Arts on numerous occasions to further his artistic career as well as give free classes to the dance/hip hop community in Philadelphia. He created his own company called olive Dance Theatre and began to tour the work up until 2007 when he contracted a spine infection that almost ended his dance career due to temporary paralysis. He reconfigured his approach to the dance and created a new way of moving that could heal and be creative at the same time. He called it Ground-Core and began teaching the technique in dance programs at UCLA, University of Milwaukee, Wisconsin, UC Irvine, Cal Arts, Point Park and SESC in Rio de Janerio. The technique breaks down the movement to make it accessible to any body type and helps create new vocabulary for dancers and movers.

Xavier works in a variety of artistic fields that include photography, film and music. His understanding of movement, sound and musicality allows him to structure noises and sounds into captivating music that draws upon emotion and coincides with his choreography. That emotion was put into creating music for Alvin Ailey American Dance Theatre in 2011 accompanying the choreography of mentor Dr. Rennie Harris in Home and again in 2015 with Exodus.

His latest work comes from 30 years of reflection and practice. The Unofficial Guide to Audience Watching Performance is an autobiographical work created with the help of the great Ralph Lemon in 2012 and toured for 4 years with the assistance of production funds from PEW Center for Arts and Heritage and NEFA’s National Dance Project.

Xavier is a 2013 PEW Fellow and 2014 MacDowell Fellow. He is currently appointed guest lecturer for the second year at Princeton University.